A new alternator for my little AWP windmill

I don’t usually write much at all about the stuff I get up to, but here is a story of my smaller wind turbine having an upgrade last month when I replaced the alternator.  I was helped by my friend Jonathan Schrieber. 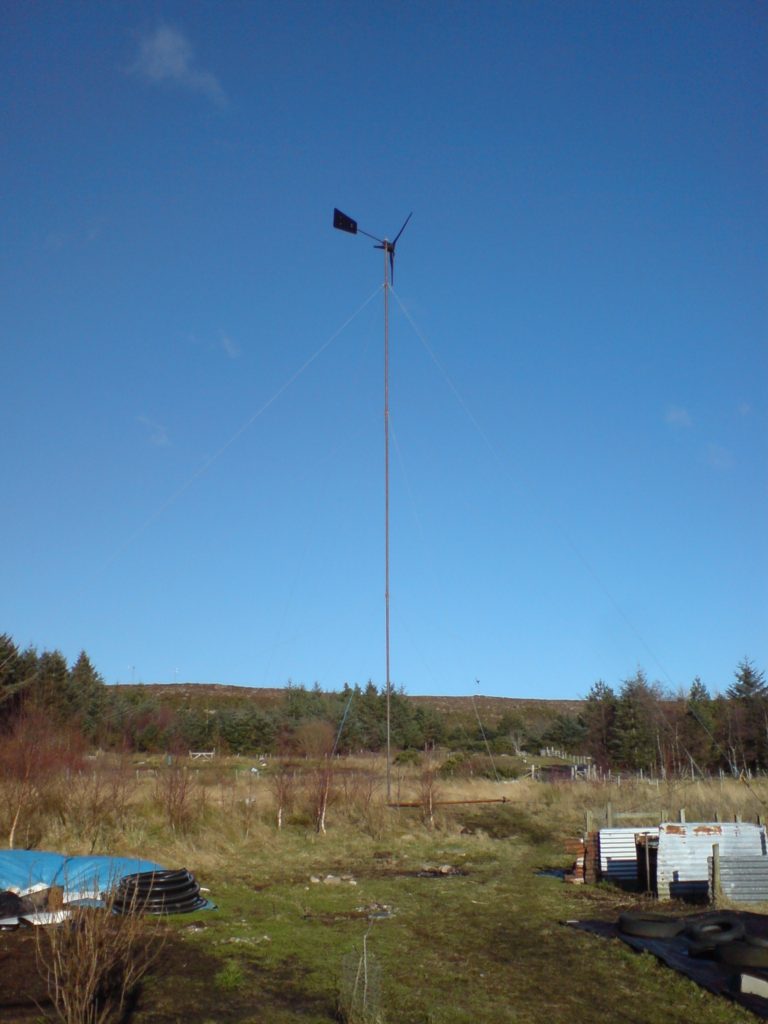 Let’s start with a photo of the African Windpower turbine I erected behind my house in 2007.  It’s a design I did for manufacture in Harare in 1996 or so.  Already here it has a Scoraig tail and Scoraig wooden blades.  It was connected to my 48V batteries.  There weren’t so many trees around in 2007 or they were small. Here’s a picture of the wooden blades carved by my neighbour Michel Grenier.  The fibreglass ones from Africa work ok, but they tended to break a lot, which is why we needed to replace them.  Wooden ones seem to last longer. 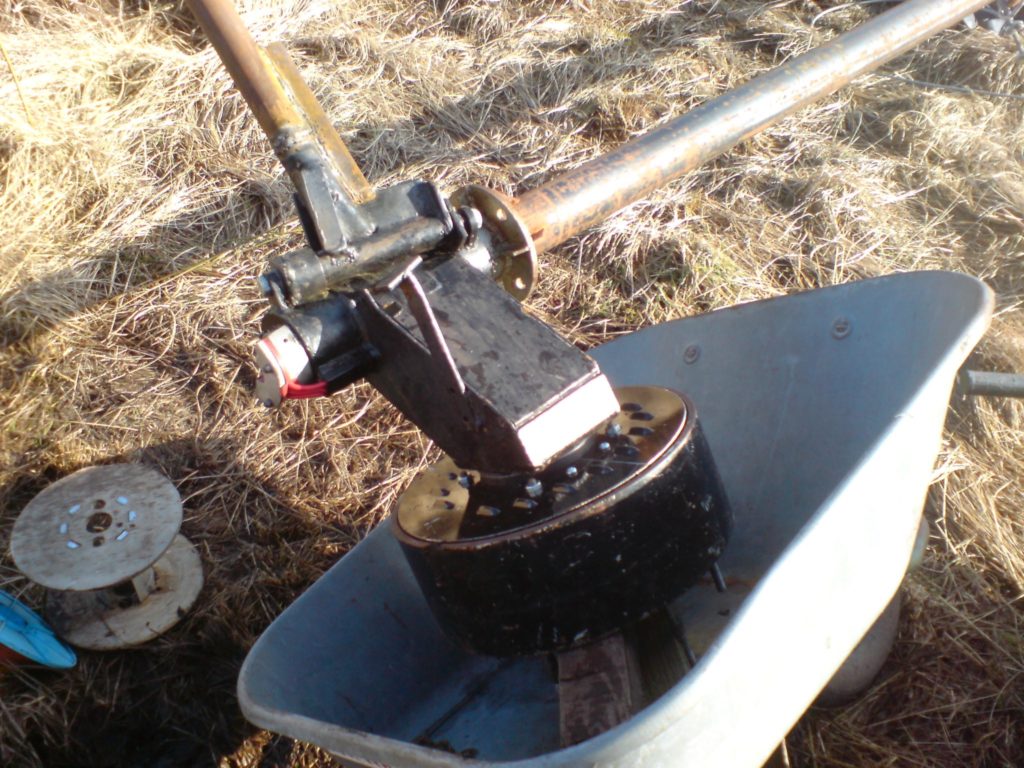 Here’s a shot of the AWP alternator.  It’s built with ferrite magnets inside a cast iron “drum” and it has a laminated steel core.  It’s really heavy (70kg) and tends to overspeed in high winds due to the fact that the steel core limits its output current.  Nowadays I prefer the axial flux design and that’t what we made to replace this one when its stator insulation failed. 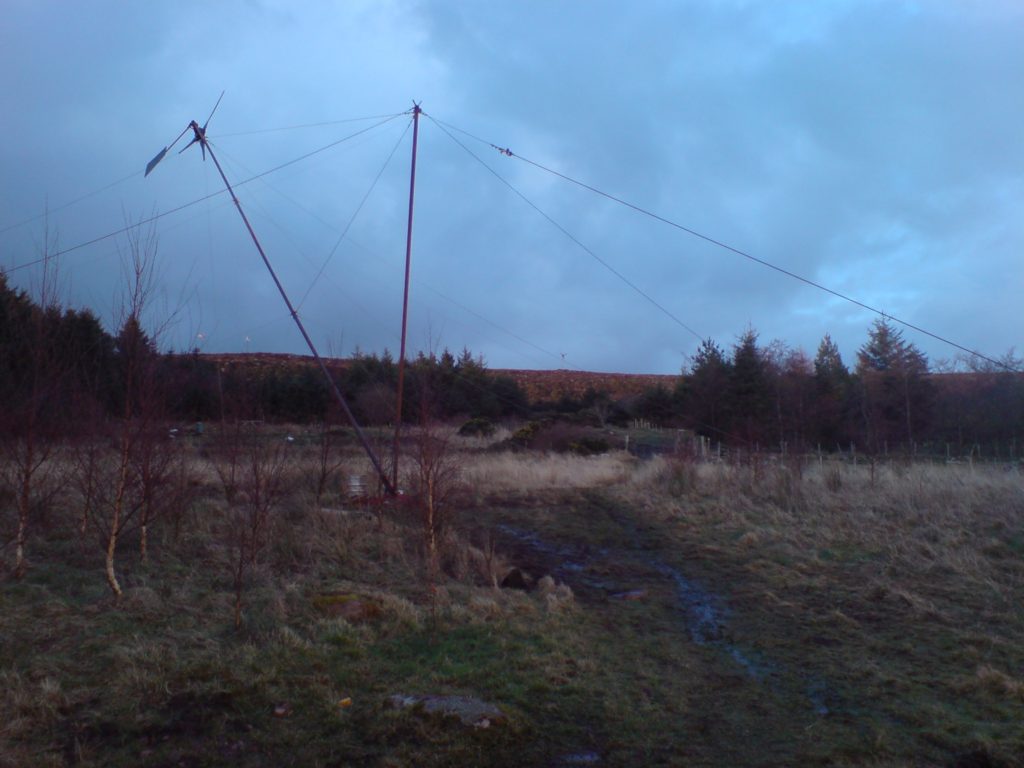 Hoisting it up on a 20 metre tower using a gin pole and Tirfor rope hoist.  Tower diameter is 89mm overall (3″ steel pipe) which is a bit slender and snaky. 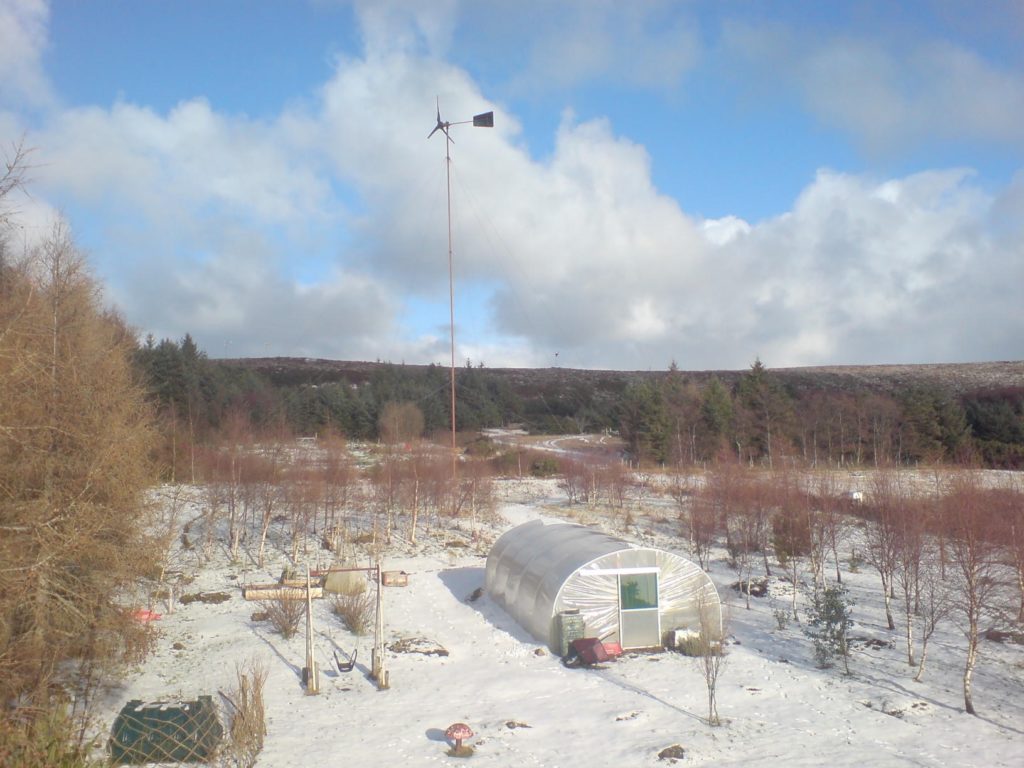 From the rooftop of the house. 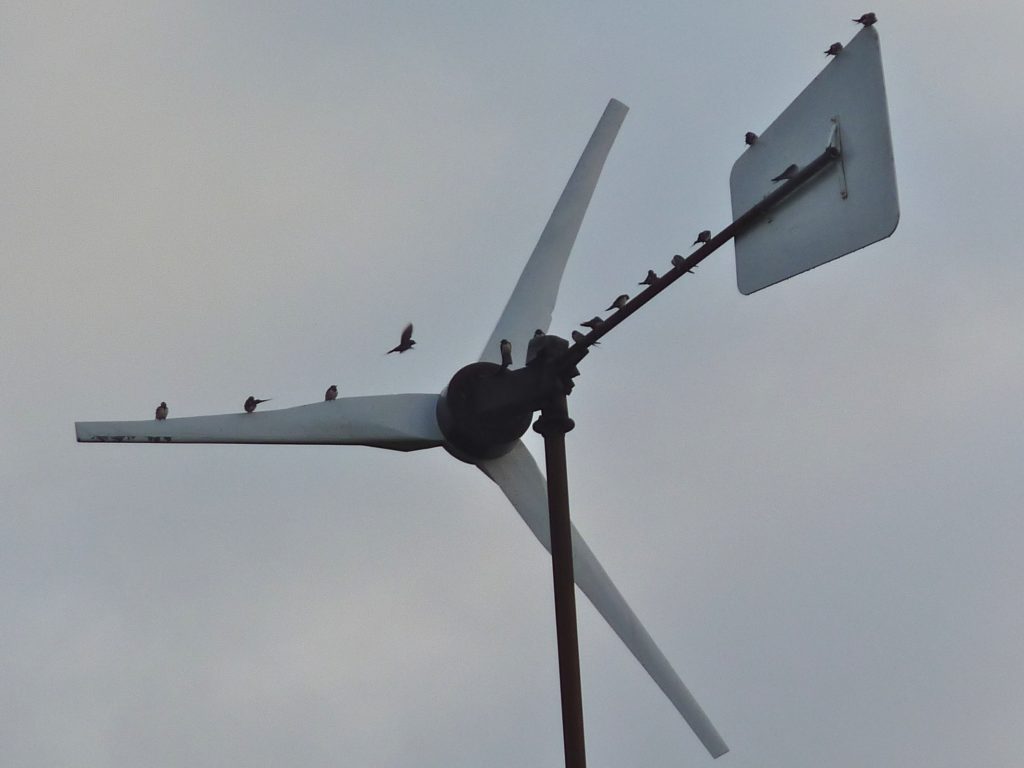 It hasn’t been without it’s dramas over the last ten years.  For example here is the result of a severe storm in 2015 when the shaft snapped and the rotating parts fell to the ground.  I decided not to run it so hard after that.  I’d been using a Midnite Classic to drive it a bit hard and get more power out of it. 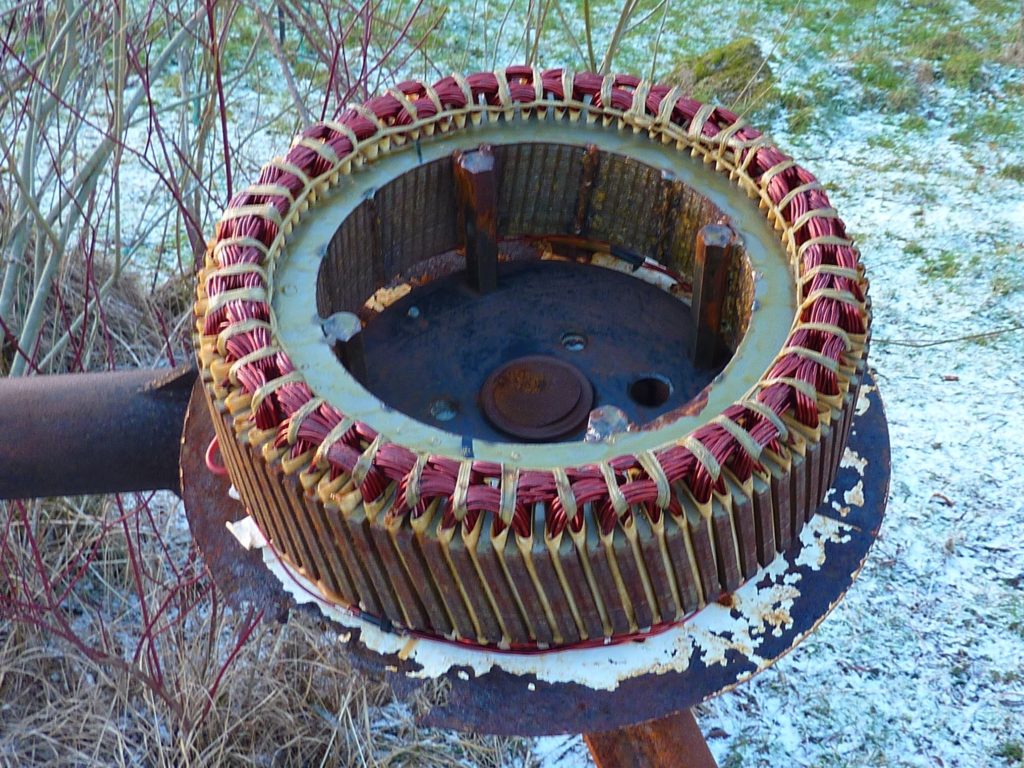 By the time I had fixed everyone else’s windmills (quite a bit of damage in that storm, so it took six weeks) and took my one down, the shaft fracture had already rusted a bit.  Or maybe it had been cracking for a long time…? Seen from the big windmill.

The AWP windmill ran nicely for 2 years or more after this fix, but some time in August this year I noticed it was running poorly and producing low power.  There is a data logger on it and you can even see what it is producing right now to the right of this column in the little chart.  The stator had an internal short that I was unable to remedy without a rewind. 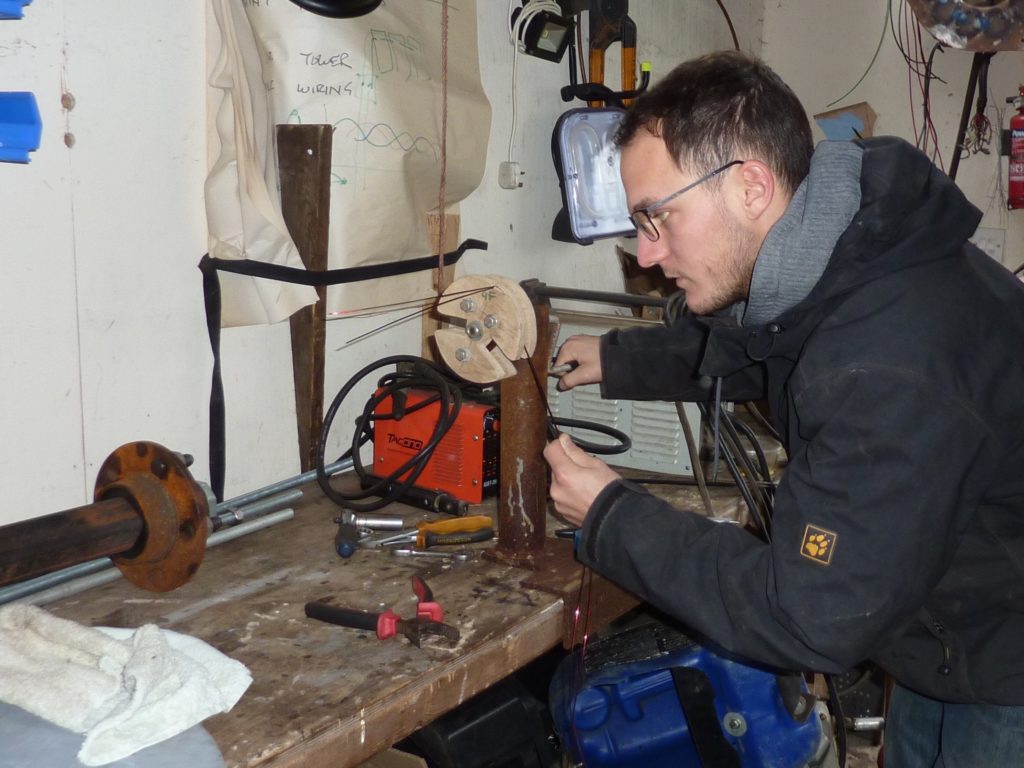 Here is Jonathan winding the first coil for the axial flux replacement alternator following this year’s insulation failure.  Rewinding the older stator is extremely laborious and anyway I prefer axial flux nowadays so glad to move on to the newer design shown below. We used 60 turns of 2-in-hand 1.4mm diameter wire.  The coils came out just right to fit 15 coils in the stator.  We put 20 ferrite magnets on each steel rotor disk. I like to use stainless steel wire reinforcement around the magnets prior to casting them in resin.  This has stood the test of time.  I don’t use glass cloth with ferrites, because the magnet stand proud in the resin without covering.  They don’t need protection from anything, as they are extremely robust.  Not a corrosion time-bomb like NdFeB magnets! A rotor in the mould ready for resin.  The handle makes it easier to lift into place. 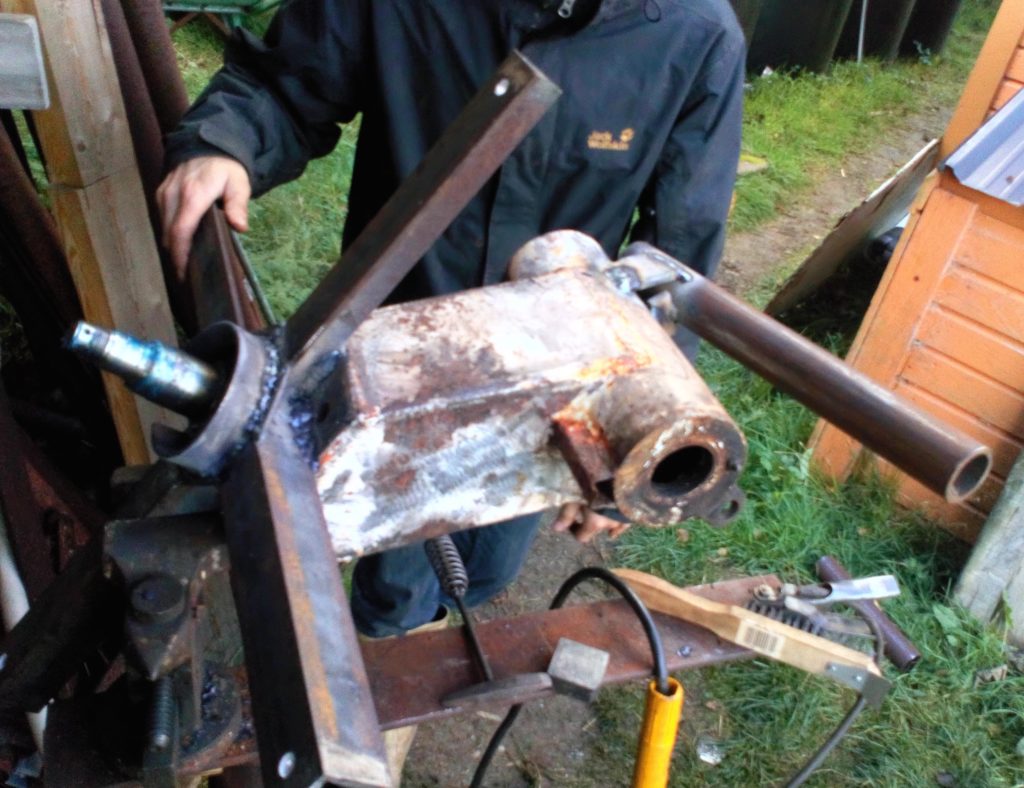 The frame of the machine ready for building the alternator. Mounting the back magnet rotor (24.5kg) onto the big trailer hub. The whole assembled windmill hanging off a hoist, waiting for the wheelbarrow. Over 100kg. circular level on top of hub. balancing the blades on a spike.

We didn’t have time to do much to the old blades.  They were still in perfect balance when checked sitting on a spike at the exact centre.  Leading edges were in good shape so I guess I must have done them within the last five years. Easing the machine onto the tower top. The down-tower wiring strapped onto its supports ready for crimp connections to the stator tails. I use small bore copper pipe to crimp the wires after they are tightly twisted together within the pipe. A quick coat of linseed oil on the rusty metalwork. Fitting the blades. We added an extra piece of birch plywood for luck. Ready for lift-off. The trees have grown a bit since 2017. Up and running sweet and smooth. I made the tail telescopic but I don’t think I will need to adjust it. Governs out at about 1200W average power. Vane area around one square metre of 9mm birch plywood.

6 Responses to A new alternator for my little AWP windmill