Installing and configuring a Tristar controller for a wind system

The important thing to be aware of when using a Tristar on a wind (or a wind and solar) system is that you need to use Diversion Mode.  This is covered in the manual but rather as an afterthought, so the details are not immediately clear.  You need to connect a dump load between the yellow ‘Load+’ terminal and battery negative (or Tristar negative). Here is how it is shown in the manual:

All of the charging sources are connected directly to the battery, and so is the controller.  Charging current does not pass ‘through the controller’ on its way to the battery.  Current is diverted to the dump load (via the controller) when the need arises.  This causes much confusion but it works very well, and it’s the usual and the best way to control a wind/battery (or hydro/battery) system. Here is another way to draw a typical setup: 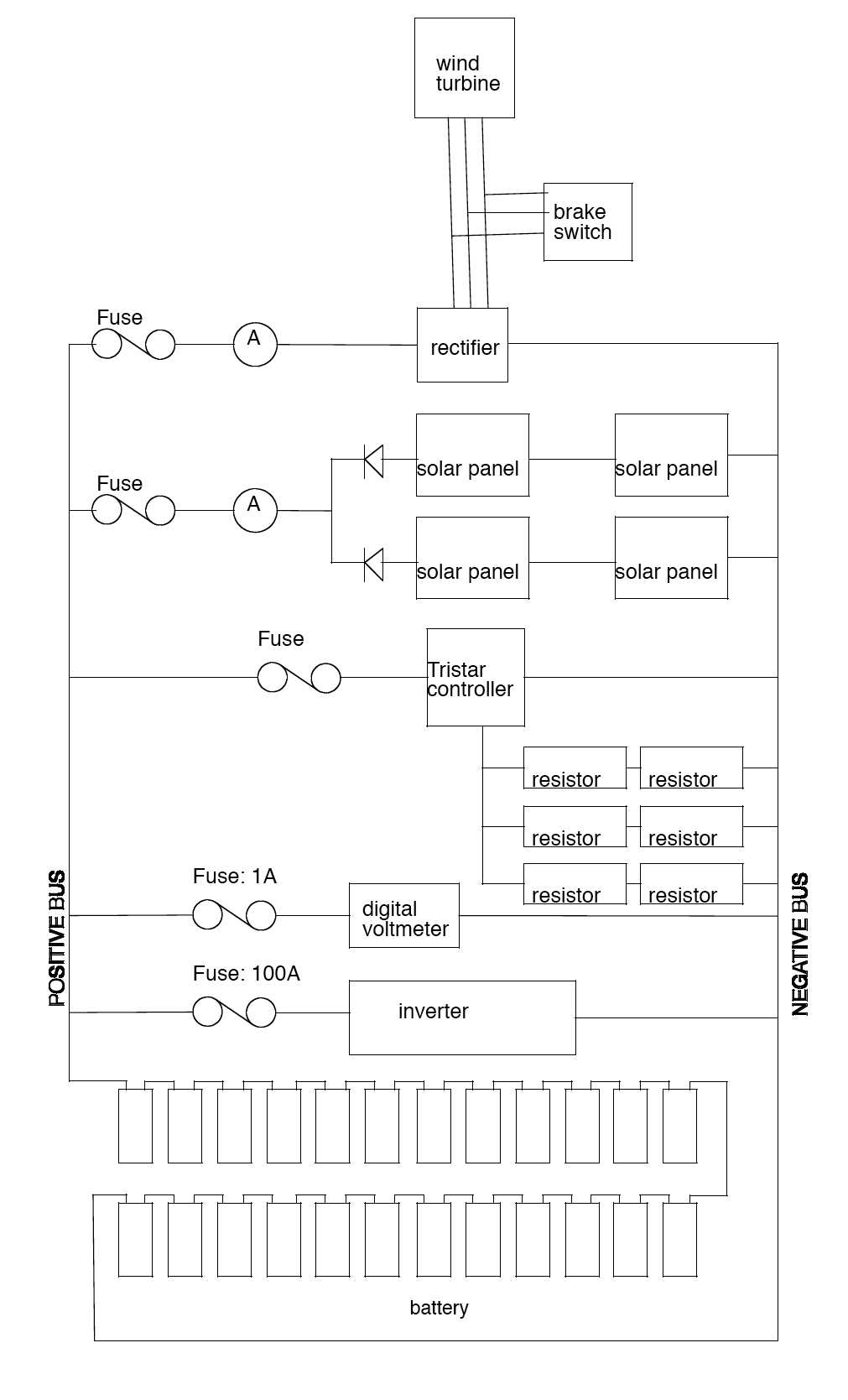 Each circuit from the battery is protected by its own fuse (or breaker) which must be suitable for the wire size used in that circuit.  Never use one single battery fuse shared by the wind turbine and other equipment. If it is blown or is removed then the wind turbine remains directly connected to the inverter or the controller without a battery.  This will result in the voltage going high and the electronics being damaged.  The controller will not protect you if the battery is removed from the circuit.

If you must have a single fuse on the battery (or a battery switch) then make sure that the wind turbine is disconnected (and/or shorted out by its brake switch) before you open that switch.  In some cases this disconnection of the turbine can be achieved by using a double-pole fuseholder. One fuse for the turbine, but still a single simple action to disconnect the battery.

The diagram shows blocking diodes on the solar PV.  This is normal practice if the solar is to be connected to the battery without its own dedicated controller.  I would not say it is essential, but it’s recommended so as to prevent reverse current at night.  With a 12V system you probably lose more energy in the diode than you would at night.

Choose the dump load(s) based on the maximum current you could get from the wind and solar combined.  (The US code requires that you allow 150% of the maximum current.  This allows for gusts of wind etc.  But few people do this.)

Load resistance increases when you add more loads in series.  Current in each load depends on the voltage divided by the total resistance.  More loads connected in parallel will use more current. You can learn more about choosing dump load resistors here.

Take care that the dump loads have plenty of ventilation or they will get dangerously hot.  Allow space around the resistor(s) and keep combustible materials away.  Keep it well away from the controller itself too.  The controller must not overheat or it will cut out or even fail.

Make sure that the Tristar can handle the full current that the loads draw from the battery at the maximum voltage (equalising voltage for example could be over 30 volts on a 24 volt system).  If necessary you can use more than one Tristar controller in parallel.    Each Tristar will need its own resistive diversion load that is appropriately sized. They can all be wired to the same battery bank.
(The US code requires that you have a second independent means of charge control.  If the Tristar shuts down, or its load fail to work then your battery could ultimately explode. But few people do this.  Tristars are very reliable and most people keep an eye on things.)

Before energising the Tristar you should configure its dip switches.  This procedure is clearly described in Appendix 2 (at the back of the manual). 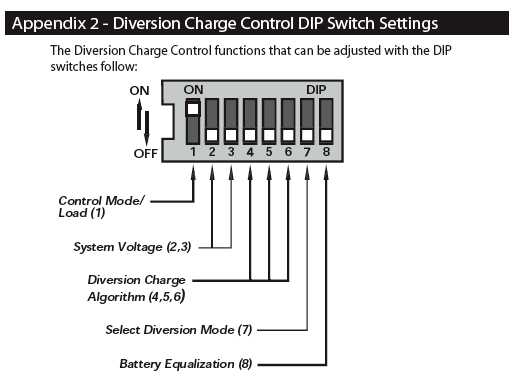 Use 2 and 3 to configure the nominal battery voltage.

Use 4,5 and 6 to fine tune the desired charging voltage based on the battery type and usage.  Switch 8 allows you to choose automatic or manual equalisation of the battery.

If the system is high budget, or subject to swings in temperature, or if there is any danger of a battery overheating (small battery), then buy and fit the optional temperature sensor.  I normally fit one.  It will adjust the charging to make sure the battery gets enough in cold weather and will protect it against damage if it gets hot.