My name is Hugh and I live off-grid and off-road on a peninsula in North West Scotland called Scoraig.  The little white shapes you can see on this photo below are wind turbines on Scoraig in 2011.

The Scoraig skyline has many wind turbines

I went to school in Edinburgh, and university at Cambridge before arriving on Scoraig in 1974 with a desire to get back to hands-on basics.  Life was basic then, but in 1978 I decided to build a windmill like a couple of my neighbours to provide electric lighting in the crashing winter storms.  Nights are long in northern Scotlan

d during winter.  Before the trees grew, the force of the wind was pretty scary.

It took me a whole year before I got something that worked reliably, and after that the neighbours all wanted one too.  I was hooked on making windmills, and it turned out that I was better at that than I was at growing veg. and keeping cows.  There were lots of problems though, due my inexperience and the wild nature of the wind as an energy source.

I used to take car batteries down to the windmill, charge them and wheelbarrow them back to the house much as they do in the developing world.  A tiny bit of electricity is quite a lot more precious than all of the rest that comes later.

After ten years of doing this stuff alone, climbing up scaffolding poles and wiring up home-made electronic controllers, I decided to go on a windpower course at CAT and learn to do it properly. 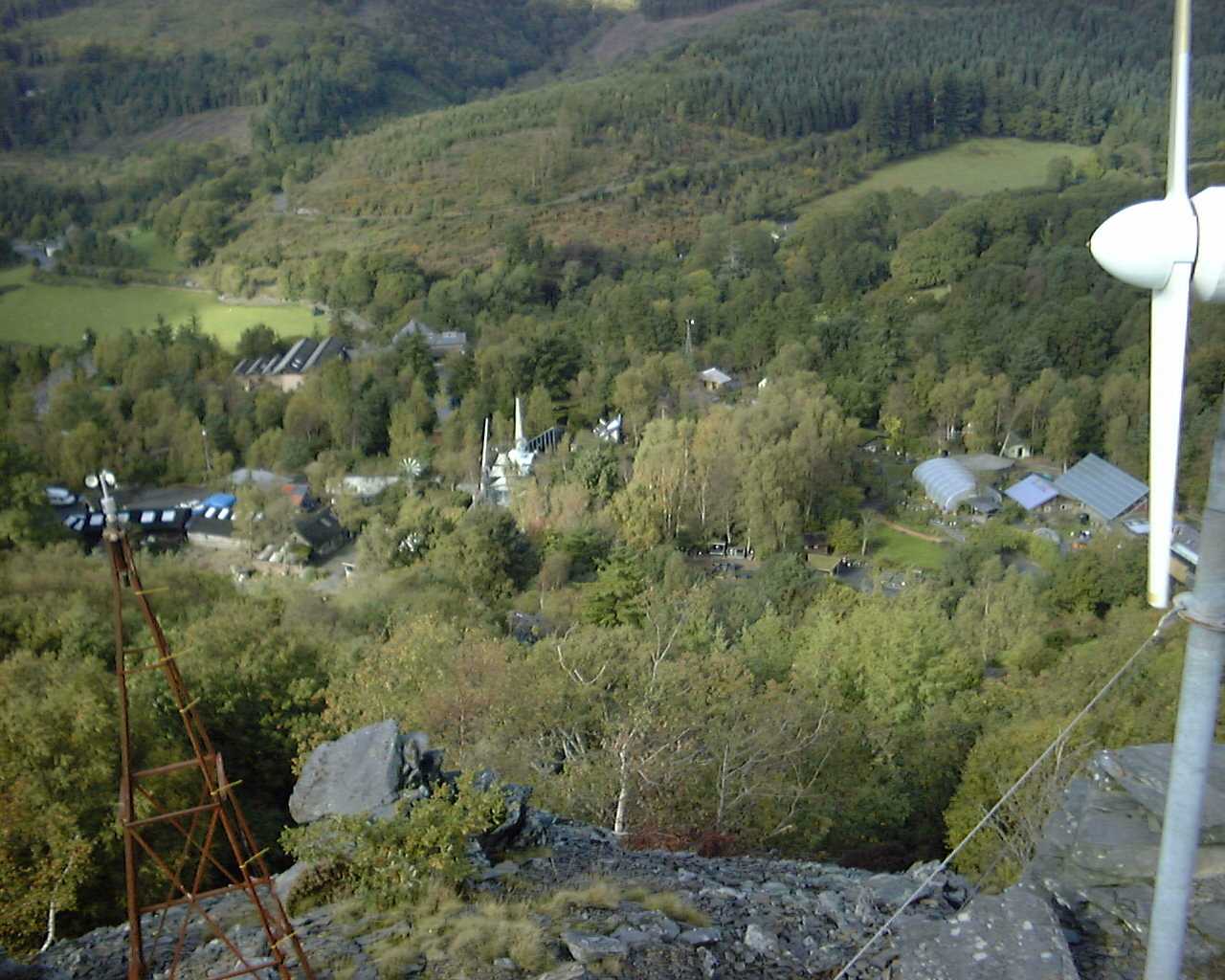 the Centre for Alternative Technology in Wales

They told me that I could come for free, but unfortunately I had to teach.  That was fun, and it turned out that I was better at talking about windmills than I was at making them.  Since then I have taught there a couple of times each year. I even get paid.

Throughout the 1990s I expanded my horizons, working with wind turbines that were built in factories and was surprised to find that they also seemed to be just as unreliable as my Scoraig-built ones. 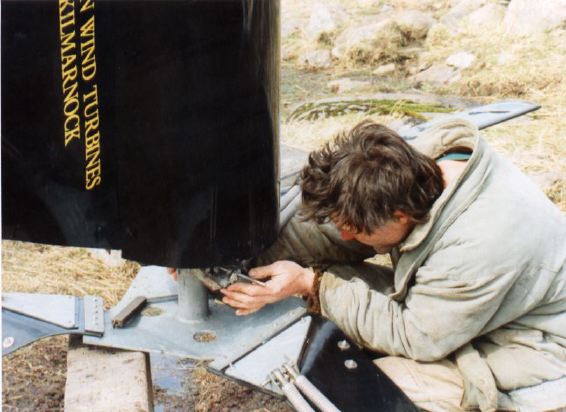 Working on the prototype of the Proven 2500 turbine in 1995ish

It’s a well kept secret in the small wind industry, but windmills do tend to go wrong.  Maybe that’s why I love them so much.  Don’t make a wind turbine to save money!  It’s much more likely to take over your life.

I identified the heavier machines that work more reliably (Proven, Ampair) than the cheaper ones that fall apart fast (Marlec, Whisper, Fortis, etc)

Also around this time I built and documented a windmill based on the brakedrum of a Ford transit van, took it to Glastonbury festival and talked to people.  Permanent magnets were just beginning to become affordable and I was able to move away from using old dynamos out of military jeeps and buses. The DC dynamos were well made, but their field coils used up all of the power in light winds, whereas permanent magnet machines did not need power for their magnetic field.

Here is a part of my brakedrum windmill plans of 1993, explaining how I made the stator.  I did not have an Apple Mac in those days.

I got a job in Africa designing a wind turbine for local manufacture in Zimbabwe.

They wanted me to use the brakedrum idea there too.  However when I got there they told me it was much cheaper to cast a drum locally than to use one out of a truck.  The windmill actually worked pretty well and the guys there set up a company called AWP with the aim of building them for export to South Africa and the USA.  Not the original idea of rural development but it worked for them.  Nowadays the Xzeres turbines are the legacy of this design. 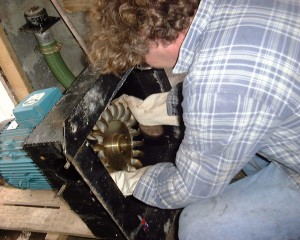 Colin fits the pelton to a 7kW motor

I was also doing some hydro power installations using induction motors as generators, mostly on the Isle of Eigg.
I was amazed by how much easier it is to make a reliable hydro turbine than a wind turbine.  They say this is because you don’t get ‘gusts of water’.  It’s a pity there is so little reliable flow of water on the Scoraig peninsula, so we have to rely on the wind. 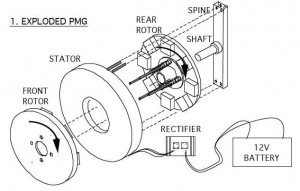 I also got another developing world job working for ITDG (now Practical Action) in Sri Lanka and Peru, helping them to make permanent magnet alternators for small wind projects.  I went for the simplest design this time – the axial flux alternator – and I still like them best to this day.  You can download this design here http://www.scoraigwind.com/pmgbooklet/itpmg.pdf although I have improved it a lot since then. 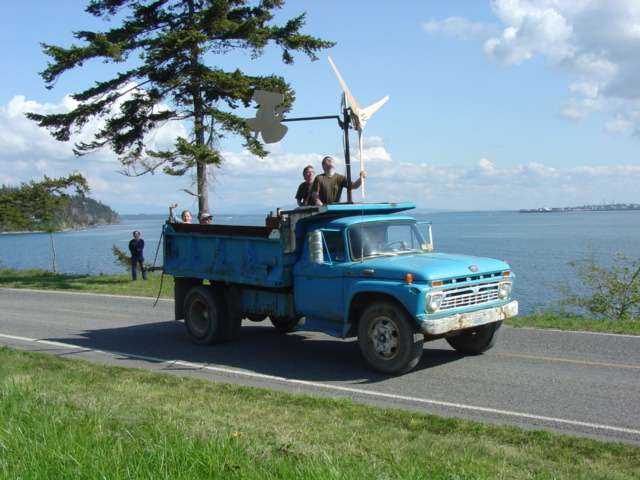 It was about ten years ago in 2001 that I started to teach courses in which we actually built a wind turbine and erected it.

I would say that these have been the most fun things I have done in my life.  You can see some photo diaries and videos listed on this page.  In this one we tested the turbine on top of a truck.

Over the last ten years I have used powerful neodymium magnets in axial flux alternators.  My main focus is to make the designs easy to build, reliable, and efficient in low windspeeds. 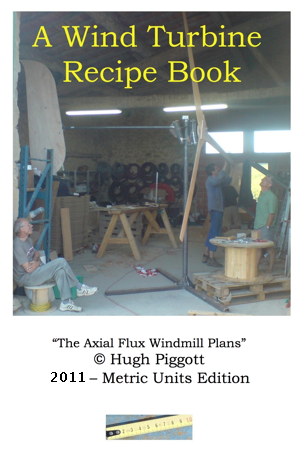 Throughout the years I have always written booklets and plans to help other people build wind turbines.  The latest version is my ”Recipe Book” describing how to build a range of different sizes and voltages of wind turbines.  This is the manual I use in my courses and it is also used by others who teach courses and has been translated  into many languages.  It runs to 64 pages, crammed with words and diagrams and tables of figures.

I update this book regularly but there is not much that I can add, so it’s probably time I started working on something completely new.

Another book that I wrote that is still available is “Windpower Workshop”.  It’s more of a reference book for building turbines rather than detailed instructions.  I wrote it in 1997 but it has just been thoroughly updated this year.

The best way to get these books is to use the menu on the top right hand side of this page and choose your location.  Take care to choose the right Recipe Book edition that has you own favourite units.  Americans will want to use Inches and AWG wire sizes, so there is a special edition for them.

I have written too much here but not nearly enough to tell you all of the stuff I would like to tell you.  Still maybe it gives  you an idea of who I am in case you actually wanted to know.  Thanks for reading this far.  If you have questions about home made windpower then send me an email at [email protected]