Over the years I lot of people have phoned me with tales of woe about small wind turbines.  I am sympathetic of course, because I know how it feels first hand but I have become hardened over the years.  I do it because I love it and I know that it will hurt at times but for me it’s worth it.  What saddens me is that most people are shocked and disappointed by wind turbine failures whereas those of us who work in the small wind industry are mostly well aware and have seen plenty go wrong.

I’d like to try to redress the balance of the sales hype a little by sharing a couple of photos I received from Fiona, a UK wind turbine owner the other day.  This turbine is only four years old and has had plenty of repairs done already.  It’s on a good site, and generates £2600 worth of feed in tariffs per year, but servicing is expensive.  Lately Fiona has fallen out with the company that installed the system.  The installer insists on charging for replacement parts even though the manufacturer has accepted that they are warranty replacements.

It’s tough on all concerned when a machine keeps going wrong, but it’s not a complete surprise to those of us who know small wind turbines.  Some work well but others (especially on high wind sites) are complete troublemakers.  My advice has always been “Don’t buy a small wind turbine to save money.  Do it for love, and enjoy the unique feeling but don’t expect an easy ride.” 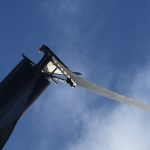 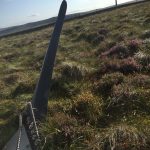 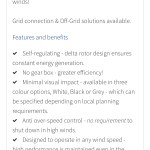 the theory of how it works

It’s great to see wind turbines sited well away from public areas rather than on rooftops(!!) and close to school front doors.  But if this blade had flown the same distance in the opposite direction it could just have smashed a window and entered the house.  Personally I see this as a justifiable risk.  It’s about as likely as being struck by lightning or blown up by a terrorist so not worth losing sleep over but wind turbine buyers need to be aware of it and that’s the reason for my post.  Also to say that events like these can severely test your relationship with your installer, even though it is none of your making.

7 Responses to Tales of Woe