Offset angle of the furling tail

I got asked a question that a lot of people ask me, so I thought it worth answering here.

“Hi Hugh my name is Bill looking through your book A Wind Turbine Recipe Book I am a little confused with the tail vane lower stop. If the tail is allowed to travel 110 degrees it would seem you would be 20 degrees to far in the opposite direction and the blades would never face the wind squarely. Does the tail come off the lower stop during normal operation? What am I missing? Thanks in advance.” 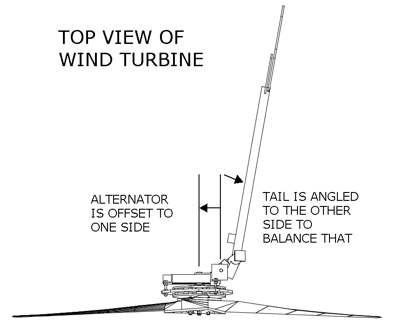 Here is a plan view of the Recipe layout.  The alternator frame is mounted onto the yaw bearing off-centre, in order to create a ‘yawing moment’ that tends to swivel the turbine around sideways to the wind. The tail is deliberately angled a little to the opposite side in order to balance this tendency and to keep the turbine facing squarely into the wind under most conditions. 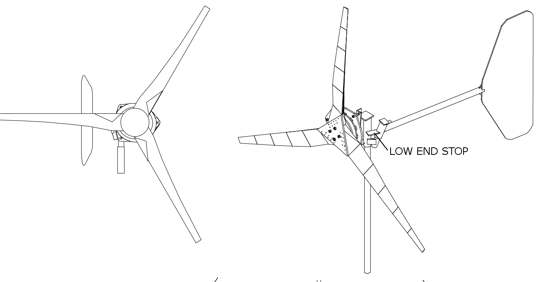 The above picture tells a story.  The left hand turbine is the design I used up to 2008.  After that I switched the offset to the other side so the machine furls to the left instead of to the right.  I will skip the reason for this change here, as it is not very important.  But it has been very interesting to watch when there are two machines of the different designs in the same field of view.  They often look like the above picture.

We tend to assume that the tail always points downwind.  That’s what it’s designed to do, right?  But looking at the above picture, this is what you actually see when there are two wind turbines with the same wind direction. The tail vane swings off the downwind direction.  It’s very noticeable when they swing in different directions.

It’s not at all unusual to see 20 degrees error between the tail and the wind direction, and often the difference is larger.  Why does this happen?  To understand it you need to think about the forces on the tail.  Before the blades start turning, the tail acts just like a wind vane, but when the blades are spinning they catch a large thrust force that is centred a bit off the centre of the tower-top yaw bearing on which the machine swivels.  The purpose of this offset is to make the machine move edge-on to the wind and protect itself from overload in strong winds.

The thrust force is counteracted/balanced by the tail, but it moves a bit sideways first.  It’s like a boat settling in the water as you climb in.  The boat settles to get more buoyancy.   The tail needs a bit of an angle to the wind to create the lift force needed to balance the blades’ thrust.  Hence the 20 degree angle in the Recipe design.

I hope this helps explain the logic.  There’s a lot to say about furling systems.  They are very simple in some ways, and extremely complex in reality, but they do the job.

I live off-grid in NW Scotland and have spent my life playing with wind turbines. I also love small hydros. Hands on renewable energy is my thing and I like to learn and to share my experiences.
View all posts by hugh →
This entry was posted in construction, my own projects, Uncategorized. Bookmark the permalink.

3 Responses to Offset angle of the furling tail