What is it about Vertical Axis?

It has been a while since I posted about vertical axis, but I can’t help noticing that everybody wants to do it, and they keep asking me for help.  I get emails, and people put comments on this blog.  They all think there is some advantage to using a vertical axis turbine.  I don’t know what advantage there can be.  Please help me understand!

“VAWTs don’t need towers.”  Hmm.  Why don’t they need towers?  Can they work in places where there is no wind?  The reason we put wind turbines on towers is because 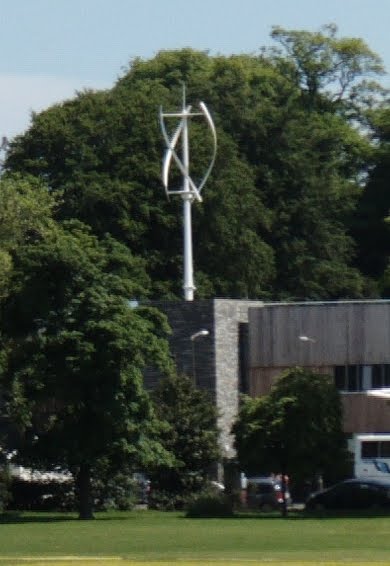 wind turbines need wind.  In spite of what you may read on the internet, modern wind turbines are pretty efficient already, and do not need to be re-invented.  What they mostly lack is wind.  A 10% increase in windspeed gives 33% more energy.  How to get more wind?  Use a tall tower.  Windspeed increases with height.  There is no useful wind in a backyard or under a tree.  The only reason that VAWTs do not need towers is that they are not wind turbines for producing energy.  They are just greenwash ornaments for architects to use to tick boxes about footprints.  Performance claims for VAWTS are invariably inflated.  Pretty often they use more energy than they generate.  It takes power to motor a VAWT up to speed and this is a waste in a lot of places because they do not have a tower, so they will never see a proper wind.

“They are silent in operation”  OK I admit I have never actually heard one running.  But the noise most people notice from small wind turbines is alternator whine and I see no reason why being vertical would change that.  For me it’s music anyway.  Blade noise depends on speed of movement and is mostly white noise that is easily masked by other sounds. 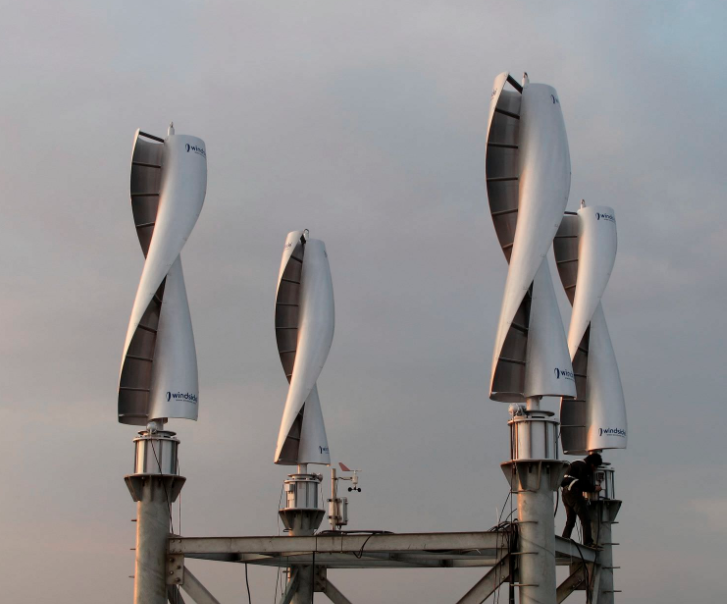 Windside Savonius turbines made in Finland are very beautiful.

I will admit that Savonius rotors turn so slowly that they could be silent.  That’s a lovely looking type of VAWT but so slow and inefficient that the energy it makes is very expensive.  They turn at low rpm and so they need a heavy alternator which is expensive.  That’s one reason why modern HAWTs have fast-running blades.

I’d love to see them around the place but in reality solar is so much cheaper that they would only be ornaments.

“They don’t kill birds.” In forty odd years of living and working under small wind turbines I have only seen two dead birds.  A lot more have been killed by the flying into the window of my office.  Not to mention my cat…  Anyway why should birds be less likely to be killed by a VAWT?  Because they stand still mostly?

“They are more efficient than HAWTs.” There is no way that a VAWT can be more efficient than a HAWT.  The blades spend about half their time moving in the wrong direction for a start.  I have never seen evidence of higher efficiency and I have never heard any expert give a reason why they should be more efficient.  For some reason VAWT manufacturers are even more prone to exaggerating performance than HAWT manufacturers.  Don’t believe either of them!  Look for independent test data.  Good luck with finding a VAWT that has been independently tested and comes with a performance report from NEL, SWCC or NREL etc.  Well to be honest the Quiet Revolution shown above has been tested but the results are secret and the turbine is no longer listed as MCS approved.  More about QR..

“You are obviously biassed against VAWTs and your mind is closed to new ideas.” This is what people say to me.  It’s true that I have never seen the point of VAWTs but my mind is open.  I really hope to hear from people who have owned VAWTs and produced a lot of energy and the blades did not fall off, and they are happy.  Please get in touch with me!  I need educating.  All I ever see is bad news, and the same old misleading hype.  Lets get some good news out there!

I am happy to help people who are building VAWTs by suggesting how they can make their own alternators.  I do get a lot of enquiries about this.  One thing I do ask is please could you find out the range of rpm and power in relation to windspeed?  You will need to know the “tip speed ratio” and the “power coefficient” of the turbine.  Then we can determine the output of the turbine in watts and its best rpm at each of a range of windspeeds and go to work.  Nobody who asks me seems to have a clue about these facts.  Again – I need educating!  Please VAWT builders do find out the performance parameters of the design based on past experience.  VAWTs have been built for a hundred years and more.  There must be some data out there.  Please could people learn from the disastrous history of the vertical axis wind turbine, and then go forward with eyes open to the  realities?

“What’s wrong with vertical axis?” I almost forgot to say so I am glad you asked me that.  OK so there’s not much wrong with the Savonius rotor except that it’s grossly inefficient and runs much too slowly for generating electricity, but it is rugged and simple and a lovely thing to look at.   When we look at high speed VAWTs of the “Darrieus” type then it’s important to understand the issues there.

It’s interesting that the wikipedia page for the Darrieus does not mention the most important word in connection with this turbine type which is fatigue.   The blades are subject to reversing lift forces in every single revolution and that amounts to a fatigue machine that ultimately breaks the blades or their fixings.  The ones that do not have helical blades also put horrible fatigue loads into the supporting structure (if there is one) so it is impossible to design a suitable tower.  I am told that these are “just a materials problem” but you’d better solve that because it is the death of most VAWTs.  Oh, and even the electrical network has to deal with pulsating power coming in.

Also the Darrieus design is not self starting so you will need to figure out a way to start it up.  Although it can start in turbulent conditions when you least expect it so if you want to keep it stopped you’d better have a brake.  You are going to need that brake in strong winds because there is no effective pitch control system that is not going to wear out.  Maybe you can use a big alternator and stall it so long as the wind does not get too strong.

What else is wrong?  Cantilevered loads on the bottom bearing can be an issue.  It’s probably worth using guys to the top of the machine.

I think there were a few more issues that I forgot.  But then I completely forgot the entire  list of reasons for doing this in the first place.  Can somebody tell me?  Why vertical axis?  I simply don’t get it.

I live off-grid in NW Scotland and have spent my life playing with wind turbines. I also love small hydros. Hands on renewable energy is my thing and I like to learn and to share my experiences.
View all posts by hugh →
This entry was posted in Vertical axis wind turbines (VAWTs). Bookmark the permalink.

38 Responses to What is it about Vertical Axis?