When do you consider your battery to be flat?

I got 42 answers to my (rather cryptic) question:

Battery makers tend to define the capacity of their products in terms of a ‘final voltage’ where the battery is ‘flat’. This voltage might for example be 1.75 volts per cell (10.5, 21, 42 volts depending on the nominal battery voltage 12/24/48 volts). At this point it is said that the state of charge (SOC) is 0%. So the ones who voted for 10 or 11 volts were correct in that respect. By then the battery is really flat.

It’s interesting that the capacity (expressed in Amphours) of a battery is defined in relation to the time it takes to discharge down to this voltage, for example the capacity at the ’20 hour rate’ will be lower than the capacity at the slower ‘100 hour rate’. But at the end of each process the battery will have reached the same arbitrary final voltage, and be considered ‘flat’. Peukert’s Law gives mathematical form to this relation between capacity and rate. Roughly stated, the capacity varies as the square root of the rate (or some similar power depending on a coefficient for the battery). It’s all very tidy.

Peukert’s Law works well for a constant current discharge, but it is not a good model for intermittent, variable loads such as we use in real life. It is not true to say that the battery is actually flat after reaching a certain final voltage. If you leave it a while the voltage will recover, and if you discharge it more gently you can find a lot more capacity. The ‘capacity’ depends more on the average discharge rate than the actual current at a given moment. More here. 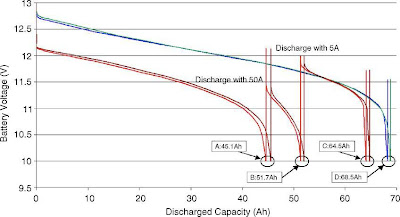 Anyway whether you approach 0% SOC fast or slowly, one thing is certain: it’s not going to be good for your battery. There is broad agreement that you will get best long term value from your battery if you do not discharge it beyond 50% SOC. Serious sulphation sets in after that. Just how many amphours you will get and how to determine when you have got there is the hard part to answer. You can use a hydrometer to estimate the SOC, but its a pretty rough instrument, (and it doesn’t read true during a partial recharge, before the stratified acid gets mixed up by the action of gas bubbles). We can maybe say that specific gravity 1.200 – 1.180 represents 50% SOC for a particular battery type at 27 degrees C. But it’s just not practical to go out and take such measurements all the time.

If there is no current (charging or discharging) at the time of the measurement and the battery has had time to recover and stabilise, then we can say that
Cell Open Circuit Voltage =Specific Gravity + 0.845
= 2.025 to 2.045 volts (using the above specific gravity figures for 50% SOC)
Now it seems the people who voted for the last answer got it right! But in reality a working system will not give you this opportunity. In reality the working voltage at 50% SOC will be lower, due to the resistance of the battery and the gradient of ions approaching the plates. So it maybe well be below 2.0 volts per cell. Especially at low temperatures.

The most popular answers were 11.5 and 11.75 volts. These may be reasonable choices, or they may be hitting the battery rather hard – it does depend on a lot of factors such as load current and temperature. A lot of people say that it’s impossible to use a voltage set-point for this purpose and you need to use a battery SOC meter (amphour meter) instead. Quite a costly item, and actually rather tricky to set up well enough to give meaningful answers over a period of time during which the battery SOC may wander up and down, and various losses take place. How for example do you define 100% full SOC? There are several possible criteria but none are perfect.

It’s best to operate a battery in the top 50% of its capacity. The top 20% (above 80% SOC) gets harder to achieve and will result in some gassing, which loses energy but it vital to get there on a windy day for the sake of the battery’s health. Make sure you get up to a good finishing voltage, and be aware that temperature has a big effect on this. 14.8 volts at 25 degrees C is equivalent to 15.5 volts at 0 degrees C. In cold weather your inverter may shut down on over-voltage before the battery gets properly charged up.

Finally one great tip I have just learned for making battery maintenance a bit less horrible. Buy a plant sprayer! It’s brilliant. You shove the end of the lance into the battery vent and pull the trigger. Whoosh it fills it up and you can actually see what you are doing at the same time. I tried this for the first time today, and I was amazed.

I live off-grid in NW Scotland and have spent my life playing with wind turbines. I also love small hydros. Hands on renewable energy is my thing and I like to learn and to share my experiences.
View all posts by hugh →
This entry was posted in my own projects. Bookmark the permalink.