More from Mac in Wyoming

Maybe would do more, but tail cuts out of wind after 45 or 50 mph winds.

The machine probably does 44 volts at a higher output. Battery bank voltage is 28.2. i guess the loss in the wire is the resistance.

I used the same magnet as you used on your 8ft turbine, 1/2″ x 1 ” x 2″ . And used 40 copper coils, 20 inner coils and 20 outer coils. 17 gauge wire, 150 turns. Resin thickness 3/4″.  Inner coils are off set from outer coils, but magnets are in line so to make it smoother turning, and it was. Inner coils are together with 1 neutral ring. And outer coils are isolated from the inner coils with there own Neutral . It seems that the inner coils start to make power a little sooner than the outer coils. Same amount of magnates passing the coils on both inner and outer of the stater, but the inner coils are a little closer together than the outer  coils because of diameter. But the volt is not much different, maybe 2 volts. I guess the phase lag is different than the other. But is seems to work good. SO 20 coils are hooked to a neutral and the other 20 coils are hooked to a neutral . 40 WIRES are a lot to hook up to the 20,  10 amp rectifier that are on a aulimum heat sink. I wish i would have used bigger rectifiers but i thought i it was only going to make MAX 120 amps. i was wrong. it makes much more.But thank God that they hold up Ok. With a RPM meter, a little hand held one that i have with a lazer and a sticker you put on it. At 90 rpms it produced 24 volts. Blades seem to work well with the gen. At around 5 mph it is making around 4 or 5 amps. Sometimes it takes 6 mph wind to start the turbine, but sometimes much less like 3mph.

With that much power, i was concerned about heat produced, so designed it so air flow can get through coils for better cooling.

In the middle of coils i used tapped wood block that was waxed, and screw to hold it in place. Then before i poured it, i put tape on top, so resin would not get in there, and leave a hold for more cooling on high out put. The small wood blocks must be tapped and waxed so they can be removed after screw is removed. 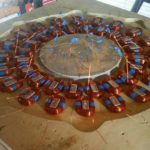 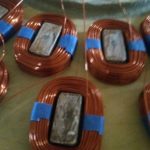 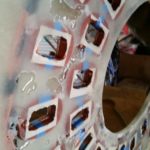 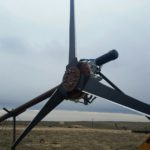