I got this email from Bruno with some lovely photos of his blades made from birch plywood.  I am not sure that plywood is the best thing to use for blades (where the stresses are longitudinal) but it seems to work well in this case.

It’s been a few months now since I was fighting with my 2400mm wind turbine. I had a problem with reaching high current. The peak power was 625w.
Since then, I’ve rewound a new stator (to your book specs), I’ve played with air gaps, I’ve put some lead inside the tail boom pipe to make it heavier. Nothing made a significant difference. I then decided to make proper blades (to your book specs) instead of the plastic ones I had (I know, I should be ashamed) . Since then, no drag anymore, and peak power during Katia’s visit last month was 1523w.(usualy peaks at 1200w)

I’ve learned that when somebody’s been working on designing a thing for the last 30 years and is generous enough to share it, the least you should do is to do what he says.

I made the blades from the 2005 recipe book instead of the latest (I prefer them), and I made them out of old birch ply I already had in the workshop. I attach some pics of the new blades.

I now want to build a 3600mm wind turbine, but I’m hopping that you will come out with a ferrite magnet design soon enough before I start it. Is that something you’re still thinking of doing? I just like the “no rust” and reliable no high current etc… about ferrite. The price difference isn’t that big in proportion with the total cost of an installation but I hate rust and I think it would benefit to a lot of the poorer regions of the world.

Thank you again for this wonderful book,
take care, 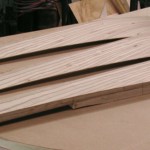 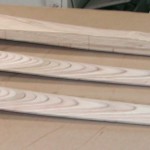 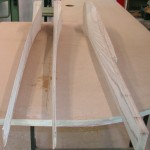 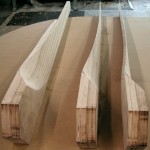 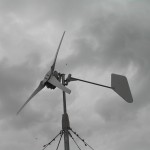 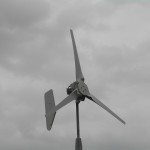 I live off-grid in NW Scotland and have spent my life playing with wind turbines. I also love small hydros. Hands on renewable energy is my thing and I like to learn and to share my experiences.
View all posts by hugh →
This entry was posted in construction, ferrite magnets, People. Bookmark the permalink.